When it comes to Google or technology you will agree with me that anything can be done, hey when was the last time I came across a landline phone, its been years ooo…  But Google is making plans to revive it, adding new features which will make users enjoy more and more convenient conversation on it.

Believe me you, I await the success story of this great idea by Google, Google revealed its landline phone would be tagged “Fiber Phone” and it includes a Fiber Phone box that works with the phones you already own. Handset not included.

On Tuesday, the company announced Fiber Phone, a service that will be sold alongside its 1Gbps broadband service and its video offering in cities where Google has deployed its all-fiber network. The service comes at a time when Google faces competition from traditional broadband providers, like AT&T and Comcast, which are also delivering ultra high-speed services. It also comes amid steady declines in landline subscriptions as consumers forgo traditional phone service for mobile devices. As of 2013, about 40 percent of adults in the US said they used a cell phone exclusively for voice communications, according to survey data from the Centers of Disease Control and Prevention.

Google’s landline offering isn’t your traditional plain, old service. It’s cloud-based, allowing you to keep your number in the “cloud” and receive and place calls from multiple devices, including a tablet or mobile phone

“While mobile phones have pushed us toward the future, home phone service is still important to many families,” John Shriver-Blake, Fiber’s product manager, said in a blog post. “Landlines can be familiar, reliable and provide high-quality service, but the technology hasn’t always kept up.”

As reported by CNET Fiber Phone costs $10 a month, which includes unlimited local and nationwide long-distance calling. International rates for calls are identical to rates the company offers on its Google Voice service. To use the service, you’ll need to attach a “Fiber Phone box” to an existing landline handset to place calls at home. You’ll also be able to answer or make phone calls using the same phone number from other devices, such as a smartphone or tablet.

Google said eventually Fiber Phone will be available in all its current Google Fiber cities, such as Kansas City and Austin. It didn’t say which cities or neighborhoods will get the service first. Interested users can sign up online using this link 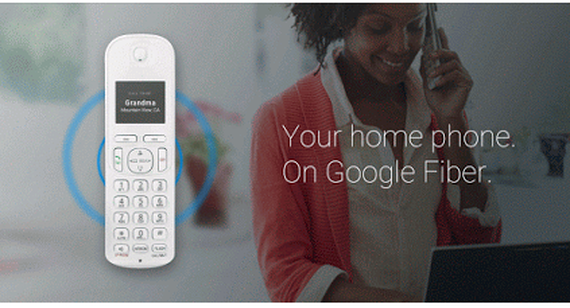