That awkward moment a twitter addicts buys a windows 10 smartphone with the hope of exploring only to be disappointed that her beloved App isnt compatible with her windows 10, damn that can be so painful, this as been the pain of many Windows 10 smartphone users not until recently when The Founder of Twitter thought it wise to make its app available for them, however am sure they might have been working on it for a while now.

Twitter officially launched its app for windows 10 mobile device after updating the twitter app to support both desktop and tablet.

In the words of Twitter Products Designer Angela Lam, he said and I quote “When bringing the app to mobile phones we carefully considered each section of Twitter and how the user interaction translates from desktops and tablets,” Twitter product designer Angela Lam said.

“We found that 90 percent of the UI (User Interface) and interaction models could be shared from these devices to mobile phones, but there were places where we decided to make adjustments to optimize for each,” Lam added.

Lets take a look at few of its features on Windows 10 which includes features like Moments, group Direct Messages, camera support (shoot, edit, and tweet videos), and quote tweet.

You can even check out top tweets, search, check out profiles, and peruse Moments without logging in, the report said. Twitter for Windows Phone includes a dark theme, which the company says was popular and has thus been included in the updated Windows app, that is available on desktops and tablets as well, not just mobile phones. 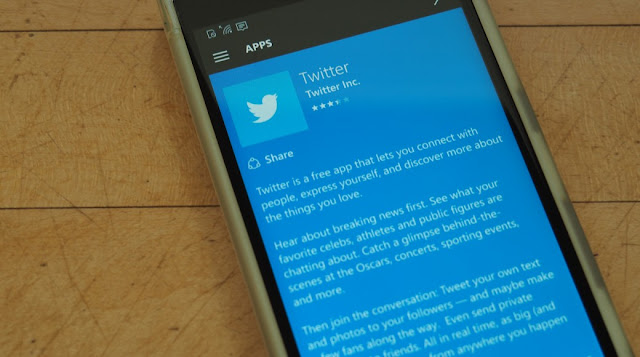