Make Video chat with your friends on BBM
All hope not lost on Blackberry as they still have few more things to introduce to us, some will agree with me that BBM on android was a better idea while some will say this lead to the death of BlackBerry, either ways, many of my friends enjoy their chat most on BBM, while others are WhatsApp die hard fan. Either you on BBM or WhatsApp, thats not the subject of today’s debate.
This will come as good news to those who love to make Skype video calls or lets say IMO, the good news is, BBM has finally introduced video chat to its apps, and this is however in beta stage, as it currently is made available for android users. 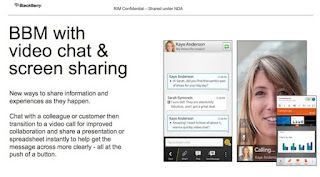 For Android users there’s an open Beta for BBM Video this was made available yesterday; However  Some users already gained access as early as yesterday morning, while it was gradually made available later in the day.
The BBM Video action comes in the form of an update to the basic BBM app. This app has been available for users for many months on several platforms. This update is ready for Android first.
There is also an iOS version of this video chat app coming soon – but for now, it’s all Android. To enjoy this features you need to update the BBM app to the latest version.