Fifa 16 is best football game for android, my only issue with fifa 16 is the non inclusion of an offline game play which makes you stress your phone battery much as the game rely on the internet for its game play. just like i said Fifa 16 is an highly detailed game of superior quality.

Few great thing you can do on Fifa 16 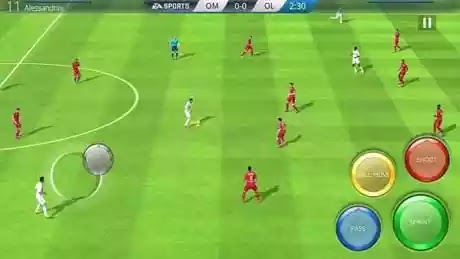 BUILD AND MANAGE YOUR ULTIMATE TEAM

Earn, trade, and transfer superstars like Lionel Messi, Jordan Henderson, and Juan Cuadrado to create your own fantasy team. Choose your play style, formation, kits, and more, then balance player chemistry for the strongest squad compositions.

Choose from over 10,000 players from over 500 licensed teams and go to battle against other players from real leagues in real arenas from around the world. Recreate challenges from current live-event football matches, too, with Dynamic Accomplishments.

Now trade players and items you no longer need for a chance of unlocking something better. The higher value items or players you trade, the better the upgrades you’ll get back!
Ready to play the beautiful game, wherever you are? Get FIFA 16 Ultimate Team now! check here for download link.