Home » download » games » How Pokemon Go Was Created: Facts You Need To Know

There are always some very touching stories behind every success, things or people don’t just get to be what they are today, this describe how the famous Pokemon Go came to be, it didn’t just happened over night and you need to learn from it, what most successful people wont tell you is ” they invested heavily in whatever they chose to do ”  Aside from your being hard working, you equally need to invest in that business, program or what have you, most importantly, believe in yourself and never give up.

Well i guess by now, you all would have heard of Pokemon Go, Whether you love it or dislike it, you’ve got to admit that the Pokémon GO craze is more than a bit fascinating, and the history of how it was created may be the most interesting thing about it. The idea was first conceived far back 2014 thanks to a Google April Fools’ Day joke. 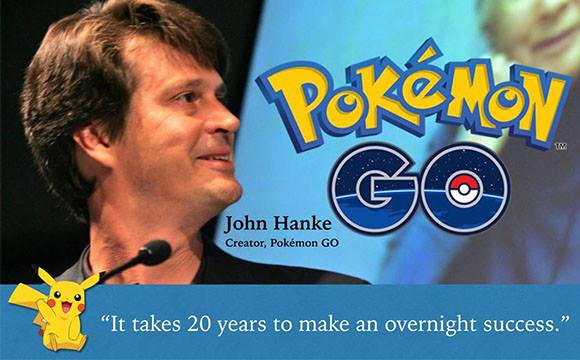 Using Google Maps it created the Pokémon Challenge, a mini-game that encouraged you to try and capture the fictional monsters when using the app. At that time, Pokémon GO developer Niantic was part of the Google team, and the then CEO John Hanke apparently took the idea more seriously than the rest. see the info-graphic maybe this will inspire you never to give up your dream.

You May Read Also : How Pokemon Go was used by 2 Officers to Apprehend a Murder Suspect

Niantic which is the brain behind Pokemon Go eventually split with Google and the rest, to start the development of the game Pokemon Go using the idea they got from Google. As its stand Pokémon GO is now bigger than the likes of Tinder, Snapchat and Twitter.