Xiaomi the well known Chinese phone maker as decided to go into laptop but this time not just any laptop but with a Notebook air that is said to be much lighter than a magazine, In case you don’t know much about this great Company i will be kind enough to list just one of its recent smartphones which is the Xiaomi Redmi Note 2 which literally sold more than any of its devices.

According to Xiaomi, the 13.3-inch Notebook Air is 13 percent thinner than Apple’s popular notebook, and 11 percent smaller. Lighter than a magazine. Mi Notebook Air is said to run on Microsoft Windows 10, syncs with Mi Cloud, & unlocks with MiBand2 powered by an Intel® Core™ i5 Processor, 8GB DDR4 RAM + 256GB PCIe SSD, and expandable SSD slot. 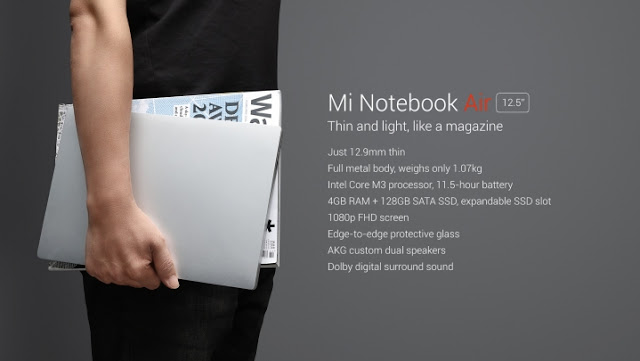 The Xiaomi Mi Notebook Air is believed to have a full-sized keyboard with back light keys, all the ports you need, and the most interesting aspects is that it weighs only 1.28kg! Full-HD display, edge-to-edge glass protection, & a full metal body. Another thing worth mentioning about the device is the fact that it comes in two variant the 13.3inch and the other with a 12.5 inch Screen.

Check out the full specification of the xiaomi notebook air

Highlight of The Spec