According to Facebook, workplace is more than just communicating between friends and family,it is a service to connect workers as well as co-workers

Facebook workplace  (formerly known as Facebook at Work) as over the years connected over 100,000 groups and the top five countries using the service include India, US, Norway, UK and France

Here’s what you need to know about Facebook workplace

workplace come with some basic Facebook features such as News Feed, ability to create and share in Groups or via chat, Live feature is also added, Reactions, Search and Trending posts. 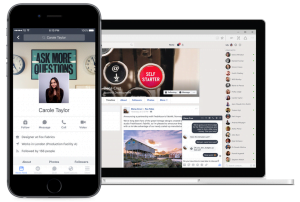 What this simply means is that with this service you can easily chat with your  co-worker across the world any time of the day, you can as well create a Group, and of course follow along with your CEO’s presentation on Facebook Live.

Interestingly, Facebook workplace also comes with other enticing feature such as dashboard with analytics and can be integrated with single sign-on, likewise the service supports identity providers that allow companies to easily integrate the service with their existing IT systems.

However, Facebook Multi-Company is yet to be fully integrated into users platform but will be rolled out to all customers in the coming weeks.

You should note that Facebook workplace isnt entirely free unless you are a non-profit organization or academic school, however there’s a three month free trial. After which you are expected to subscribe.

Starting price on Facebook workplace is $3 per user for a whole month ( 1,000 users ) you can check here for price.