Funny to say, Nokia just made some adjustments to the well known 3310 and decided to release in 2017 but the price in Nigeria will crack your ribs

Many fans of the phone have being waiting eagerly to get their hands on the new handset but it was actually made available to only a few countries luckily Nigeria is included.

Interestingly, the Nokia 3310 is now available in Nigeria with a price pegged between N18,000 – N20,000, Yes ! . Although its still affordable but considering there’s little to what it could perform, one may need to think twice before purchasing

That being said, the handset can be purchased on Jumia, Konga and hopefully some other major stores across the country

On the other hand, we all know that Nokia device are know to be built strongly which made their products one of the strongest phone ever produced.On the likes of the new Nokia 3310 2017,it also possess the features other version of it’s kind that was produced has and in fact it is even more advanced than the previous versions.

What is your mind telling you now, Nokia 3310 price in Nigeria, do you thinks its that affordable ?  or cheap ? Should i be expecting one from you ? lol Although it might not be a smartphone but it has some amazing features you might like.

Difference between the original and fake

Yes, for ever original, there’s another fake version, the Nokia 3310 2017 inst exempted,  so beware of where you purchase it , but the picture below should guide and give you an insight on how to spot the fake one 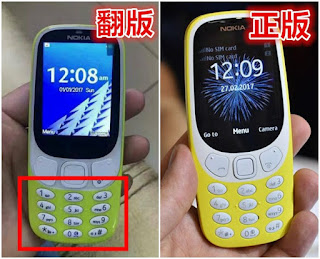 Have you bought the Nokia 3310 2017 ,you can decide to leave a comment by telling us how your experience was using the device, is it OK or not ? you could also spot out it’s draw back for us and let us know so it will enable those who want the device also decide whether to make the purchase if they feel comfortable with the drawbacks